“During the second quarter of 2012, Hamilton Thorne sales declined versus the prior year, interrupting the trend of nine consecutive quarters of year-over-year growth.  Laser sales were down slightly, while CASA sales were off substantially, due in part  to cyclical fluctuations in demand, particularly for toxicology products, and due in part  to purchase deferrals in anticipation of new product announcements,” said David Wolf, President and Chief Executive Officer of Hamilton Thorne Ltd.  “While our year-to-date sales decline was disappointing, we expect to see a return to steady growth as the demand for new products such as our LYKOS® and XYRCOS™ lasers continues to grow, as the refreshed CASA product line roll-out proceeds, and as our new IMSI-Strict™ software captures market share.”

Mr. Wolf continued, “In order to utilize our resources more effectively, we have reduced our R&D and marketing spending in new market development and have refocused our resources on penetrating and dominating the clinical IVF market and the animal fertility markets where Hamilton Thorne has an established business, strong brand recognition and quality products to truly transform the industry.  Also, to increase our sales efficiency, we have realigned our sales personnel around target markets, rather than on a product-line basis.  These changes, along with strong expense controls, have allowed us to right-size our overhead structure with a goal to be operational breakeven with sales in the range of $1.8 million per quarter, which are levels we achieved in three of four quarters in 2011.”

Hamilton Thorne’s well-respected CASA product line and cutting-edge ZILOS-tk® and LYKOS® clinical lasers have been leading products in their respective fertility fields.  The Company believes that the clinical market will continue to be a strong growth opportunity as investments are increasing by an average of 10-20% in IVF clinic expansion and annual IVF cycles¹. Growth in mature markets like Europe and the United States is driven by adoption of new procedures such as pre-genetic diagnostic diagnosis (PGD), for which Hamilton Thorne’s LYKOS® laser with Multi-Pulse software is ideally suited.  Emerging markets have increasingly become important sales opportunities for the Company with the rise of disposable income and the increased need for assisted reproductive services as dual income families delay child birth. Signs of growth and capital markets interest in the sector have been evident in recent VC investments and several M&A deals announced in the first half of 2012.

¹US and Global data (exc. Canada) published by American Society for Reproductive Medicine (ASRM) in 2009.

All amounts are in US dollars, unless specified otherwise, and results expressed in accordance with the International Financial Reporting Standards ("IFRS"), which replaces Canadian Generally Accepted Accounting Policies ("GAAP") effective January 1, 2010 for all publicly accountable enterprises in Canada.

The Company’s total sales decreased 33% to $1,234,117 for the quarter ended June 30, 2012, a decrease of $599,125 from $1,833,242 during the previous year.  Six months sales for 2012 of $2,808,142 were down 14%, from sales of $3,278,655 in 2011. These decreases were attributable to reduced sales of our existing products, partially due to purchase decision deferrals in anticipation of new product introductions, a slowdown in sales on toxicology testing products, a decline in sales in Europe due to economic problems and a slight softening of demand for products in the human clinical market in the US.

Operating expenses were reduced to $1,361,066 and $2,762,651 for the quarter and six-months ended June 30, 2012, down from $1,460,591 and $2,960,476 for comparable periods during the previous year.  This decrease in operating expenses represents continued focus on reducing operating expenses across all functional areas of the Company.

General and administrative (G&A) expenses decreased from $465,247 to $442,391 for the quarter ended June 30, 2012 versus the prior quarter, and decreased from $1,031,508 to $960,683 for the six-month period due primarily to strong expense controls and the non-repetition of 2011 foreign currency valuation adjustments related to the convertible debentures issued in August 2010 and March 2011, which were issued in Canadian dollars.

Net interest expense decreased from $155,489 to $74,538 for the quarter ended June 30, 2012 and from $282,510 to $155,846 for the six-month period.  The decrease was due primarily to the significant reduction of the Company’s debt as a result of the conversion of approximately $1.6 million of convertible debentures to equity and the reduction of the Company’s bank loan by $1.5 million, both of which were completed in the quarter ended September 30, 2011.

The net loss for the quarter ended June 30, 2012 increased from $443,328 to $790,815 and from $1,189,614 to $1,319,804 for the six-month period of the previous year.  The increased loss was due primarily to lower gross profits resulting from lower sales volumes and product and sales channel mix, partially offset by reduced spending and reduced interest expense.

In connection with the conversion of the remaining $345,000 in principal amount of 10% convertible unsecured subordinated debentures issued in March 2011, the Company also offered holders the option, exercisable by September 15, 2012, to convert approximately $47,000 of accrued interest to common stock at the conversion price of Cdn $0.07 per share.

The financial statements are available on www.sedar.com.

A material change report in respect of the private placement will be filed less than 21 days before the closing date.  The Company considers this is reasonable and necessary in order to address the Company’s immediate funding requirements and corporate operations.

Neither the Toronto Venture Exchange, nor its regulation services provider (as that term is defined in the policies of the exchange), accepts responsibility for the adequacy or accuracy of this release. 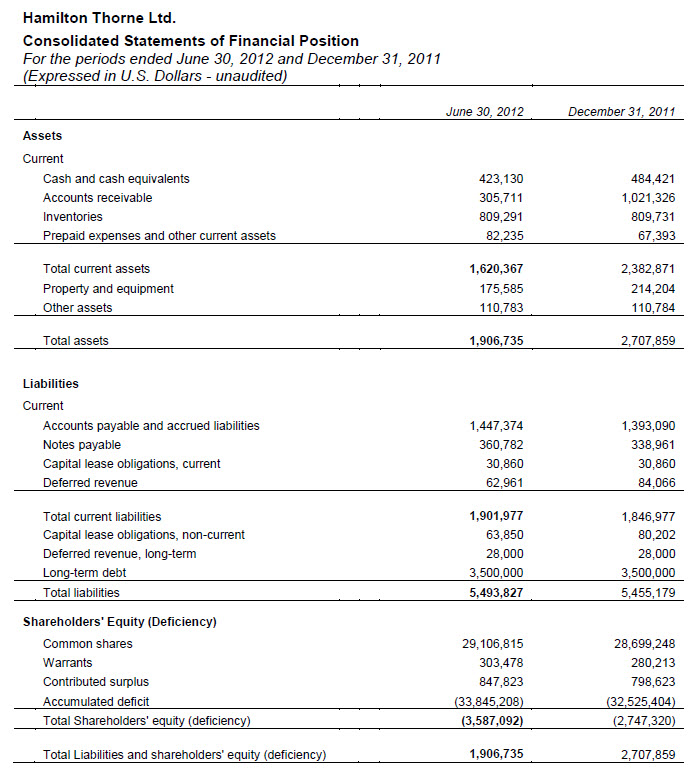 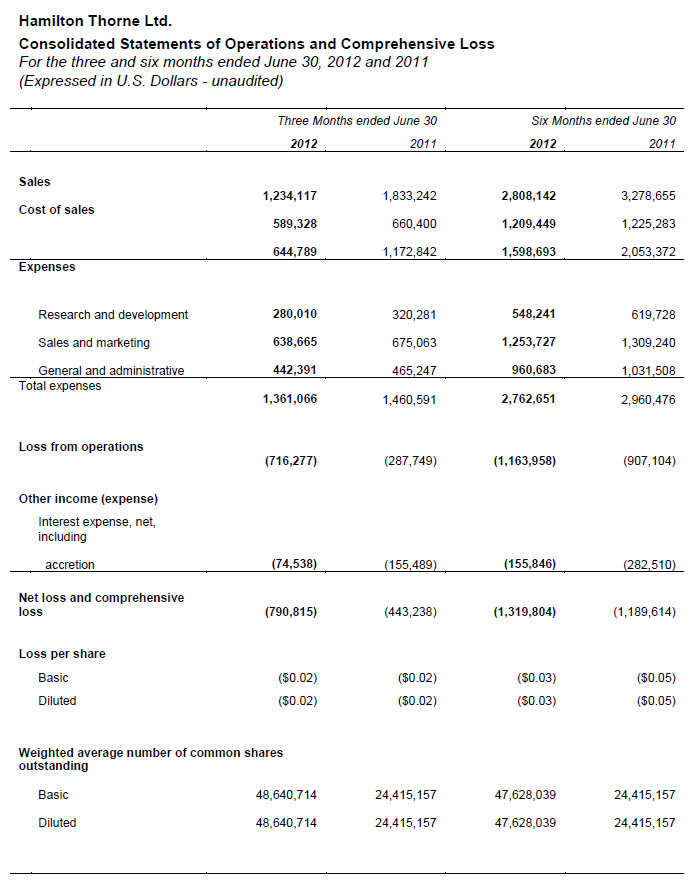 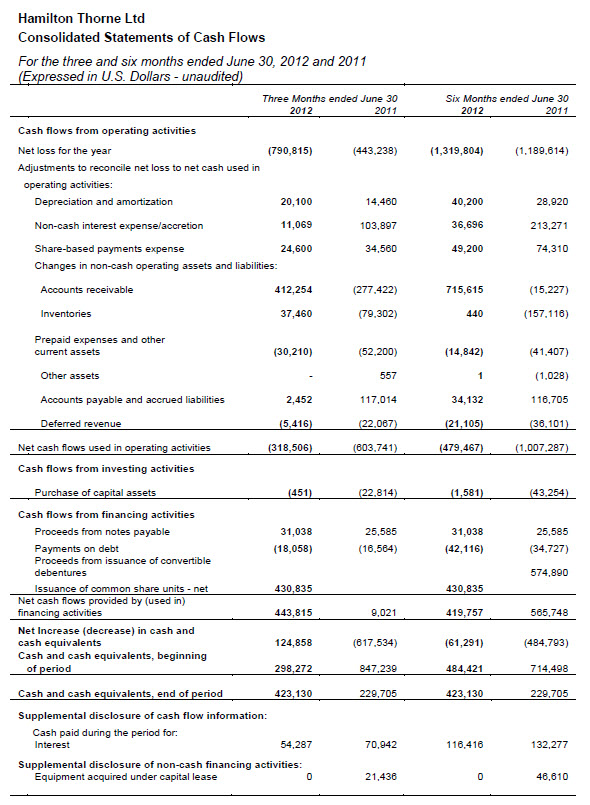